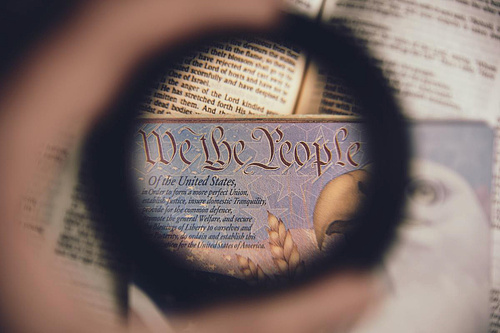 Today we continuously hear those in the media and government promote Democracy as the best form of government. When you read below, you can replace the word "democracy" with human nature. If we seek to understand, we can see this cycle in our personal lives as well as gain insight into what is going on in our country and others today.

These nations have progressed through this sequence:
A democracy cannot exist as a permanent form of government. It can only exist until the voters discover that they can vote themselves something for nothing from the public treasury.

From that time on the majority always votes for the candidates promising the most benefits from the public treasury, with the results that a democracy always collapses over loose fiscal policy, followed by a dictatorship.

Our country was founded as a Republic, not a Democracy. The word democracy is NOT in the US Constitution, NOT in the Declaration of Independence and NOT in the Bill of Rights. These documents put strict limits on government and its ability to dictate people's personal lives.

In a Republic, the rights of the minority are protected from the majority. In a Democracy, two wolves and a sheep vote on what’s for dinner. Majority rule sounds fair, but it can be a terrible and wicked thing.

Freedom is what leads to prosperity and it must be protected. But the paradox is, prosperity leads to entitlement and complacency which leads to loss of freedom.

How do we maintain a balance between our freedom and its inevitable long tail consequences? Beyond just "making money our slave", solving this riddle is at the heart of True Wealth Formula.

© 2000-2021 TrueWealthFormula.com. All Rights Reserved. A division of Call To Freedom.

Nothing on this site should be considered investment, tax or legal advice. Always consult a licensed professional before making any financial, investment, legal or tax planning decisions.